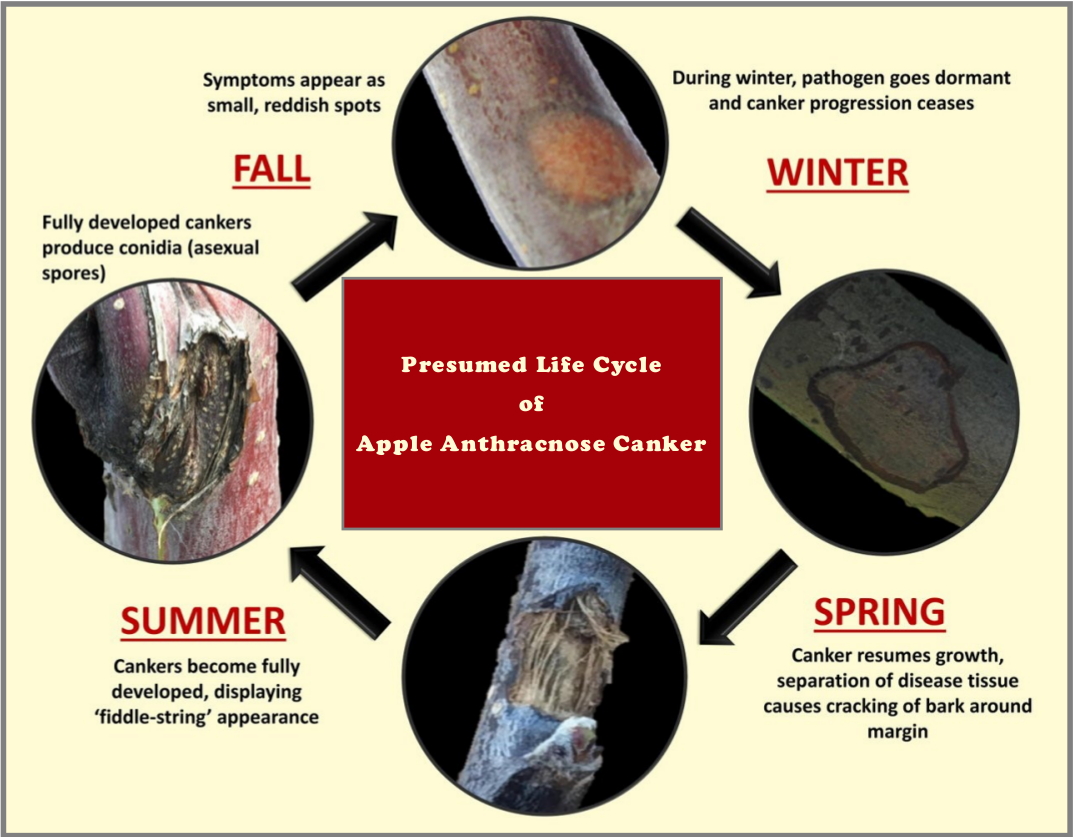 Apple anthracnose is a fungal disease that significantly impacts apple production in the maritime Pacific Northwest and in regions with similar climates. The fungus produces cankers on trees and a post-harvest fruit rot known as “Bull’s-eye rot”. The cankers serve as the source of inoculum for inciting the fruit rot phase of the disease and can limit long-term orchard productivity. Species within the fungal genus Neofabraea are the causal agents responsible for production of apple tree cankers and Bull’s-eye fruit rot. The geographical distribution of Neofabraea species varies significantly with the environment, with tree cankers (apple anthracnose canker) west of the Cascade Mountains attributed to Neofabraea malicorticis, whereas tree cankers (perennial canker) east of the Cascade Mountains are attributed to Neofabraea perennans. Other potential disease-causing species are Neofabraea alba and Cryptosporiopsis kienholzii.

In areas west of the Cascade Mountains, apple anthracnose is caused by the fungus Neofabraea malicorticis (synonyms Pezicula malicorticis, Cryptosporiopsis curvispora). The maritime climate with mild year-round temperatures, abundant winter rains, and cool-humid summers is critical in the development and virulence of this disease. The canker phase is considered the most serious phase of the disease because it can cause severe damage to trees, kill newly planted trees by girdling the stems and branches, and reduce overall tree health and yield in established trees (Fig. 1). Growers in the maritime Pacific Northwest have reported removing 2-5% of trees each year and in some cases entire orchard blocks to prevent the spread of cankers. The cankers serve as the source of inoculum that incites “Bull’s-eye rot”, which develops on fruit in storage. The post-harvest rot produces lesions on the fruit skin that appear as circular, flat or slightly sunken spots that are brown with a pale center that forms a bull’s eye.

Infection generally occurs during fall rains and first appears as a small, circular red spot on the bark; new cankers are most visible when the bark is moist. The discoloration extends into the tissue as far as the sapwood which contains the functioning vascular tissue. As the lesions enlarge, they become elongated, sunken and turn an orange to brown color. A margin develops between healthy and necrotic tissue, causing the bark to crack around the infected area. During the winter months, the pathogen goes dormant and canker progression ceases.

In spring, the fungus resumes growth under favorable conditions and canker expansion progresses most rapidly up and down the branch when sap flow is initiated. By mid-spring the canker becomes fully mature (Fig. 2). By midsummer, about a year after infection, the pathogen will begin producing conidia on the matured cankers. Conidia are asexual spores that are contained in fruiting bodies known as acervuli. The fruiting bodies appear as cream-colored and protrude outward from the bark. Fungal spores appear to infect healthy bark, and mycelial growth occurs in the cambium beneath the bark for a period of time before killing the bark itself to form a visible canker. The pathogen can live for several years in necrotic bark tissue, producing spores each year. The conidia produced on the dead canker bark are exuded in a gelatinous matrix and disseminated by rain splash to other parts of the tree, surrounding trees and fruit, causing new infections.

Management in orchard. Disease management relies heavily on pruning out the cankers to remove the inoculum source. Stems or trees that are heavily infected with cankers should be removed from the orchard and burned.​

Chemical controls. Because cankers are often overlooked, fungicide treatments are needed in conjunction with pruning. Currently, there are no systemic pesticides that will control the disease. Refer to the Pacific Northwest Plant Disease Management Handbook for more information on pesticide use.